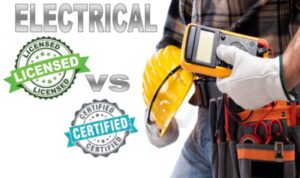 Do You Know The Difference Between Electrical Certification and Electrical Licensing?

Certification and licensing are two terms that are misunderstood and used interchangeably in error.  Adding to the confusion, there are different types of certifications and licenses, and they vary by state.  Even within state licensing boards, there are inconsistencies from one trade to another.

First, a certification is generally given to someone who meets a set of criteria that is established by an accrediting organization or industry.  These can be both for profit and non-profit organizations or government agencies.  A license is generally issued by a government entity, such as a state or jurisdiction. A driver’s license is a good example of a license that is issued by a government entity.  If you are licensed in one state and go to another, you may need to get licensed in another state.

The best advice for anyone wanting to enter the trades is to seek out a professional association like the IEC of the trade you are wanting to pursue.  You can also search for the professional licensing board in your state.