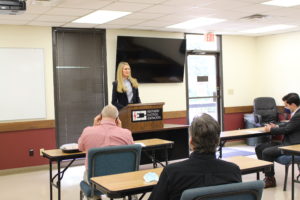 Senator Loeffler was greeted by Executive Director, Niel Dawson, IEC Atlanta Board President, Bob Harmon of Harmon Electric and Associate Executive Director Todd Hawkins for a tour of IEC’s 10,000 square foot training facility.   Senator Loeffler received a first- hand view of IEC’s detailed lab set up, designed to give its apprentices hands-on training.  Mr. Dawson elaborated on the training model and its benefits of keeping apprentices employed and tuition structures that allow IEC students to graduate without incurring any debt.

From touring the building, Senator Loeffler went on to address 30 business owners and managers.  IEC Contractors members came out to show their support and to hear the Senator speak on the concerns that affect the industry, their business and how the Senator supports the merit shop contractor.

IEC is honored to have a current United States Senator as a guest speaker for its monthly luncheon meeting.  IEC strives to give its members access to resources to operate their organizations at their highest potential.  A conversation with the Senator as we move through these uncertain times is one of the many resources IEC continues to provide its members.